Following on the previous 4 posts (starting with “Perceived Levels of Reality“) people perceive three very different levels of reality. Nouns represent the static, momentary outcomes, the capacities presenced here-now, the things. Verbs reflect the flowing, ever moving shifts in relationships and capacities experienced over time, development. The verbs put the nouns in movement. Light focuses on the possibility seen, accelerating the potential, as people participate with it. Light accelerates the verb that moves the noun.

Now I will apply these three levels of perceived reality to the experiences of harmonic vibrancy (summarized in the post “3 Circles of Harmonic Vibrancy“), through the five primary relationships. By listening to what people describe as their experience of the harmonic vibrancy in the five primary relationships (self, other, group, nature, spirit), they describe the levels of reality most available to them. 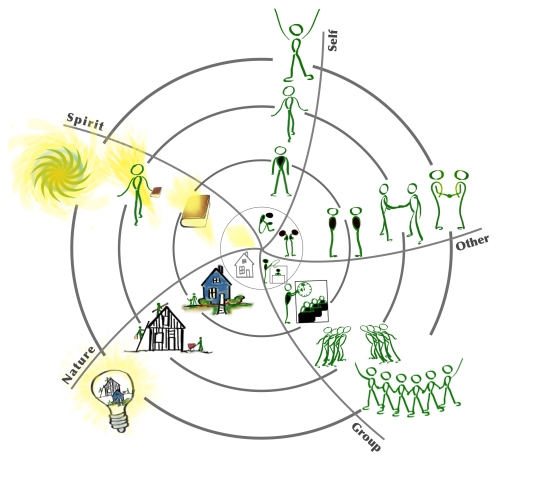 People described the inner circle, in the figure above, as an experience of scarcity. In this experience, people can only access the things-noun level of reality. In the middle circle of the same figure, the circle of occasional abundance, people can access both the development-verb level and the things-noun level. In the outer circle, where people experience abundance in all five relationships, people can access all three levels of perceived reality. The table below captures the available levels of reality for each circle of harmonic vibrancy.

Table: Levels of Reality Accessible in Circles of Harmonic Vibrancy

In the next 4 posts, I will integrate the three levels of perceived reality and the five primary relationships.

This site uses Akismet to reduce spam. Learn how your comment data is processed.

Google Translate to Your Language