“Am I just a dreamer or is there another possibility for how we interact than the current one? Isn’t there another paradigm than economics, which is based – by definition – in scarcity-driven agreements? If I look around, I cannot believe that organizations and human beings have to compete to be better off!”

It has always been hard for me to believe that the current and predominant mode of human interaction – based in fear, distrust and competition – is the only way it works. This is what I was told by my teachers in grade school, my social-economic professors in university, and my bosses in most of the places I worked. The answer to my questions, were always some form of, “This is just the way it works. Human beings are hardwired to compete. Look around Christoph. Any socio-political system believes in the economic ideology… so it cannot be wrong. And by the way… you do not have an alternative either.” That was right; I could neither see nor come up with an alternative. I could not see beyond my own limitations. I was raised in the economic ideology and I was unable to transcend neither my mental model nor the agreements I was taught.

So I started to look for answers, and I found Ecosynomics. I now know that my “crazy visions” of agreements based in collaboration, trust and interdependency are possible and being lived in thousands of groups organized in many different ways, on a daily basis. It is thrilling and fascinating to find that they are ordinary people, doing ordinary things in a completely different way. In the last year, I have visited with 14 of these groups in three different European countries, spanning from study programs in academia to global networks, civil society organizations and companies [see the pie chart below]. In this blog post, I provide a general overview of my work. In future posts, I will dive into specific cases, sharing the practices and agreements – based in abundance – that lead to their extraordinary levels of performance. 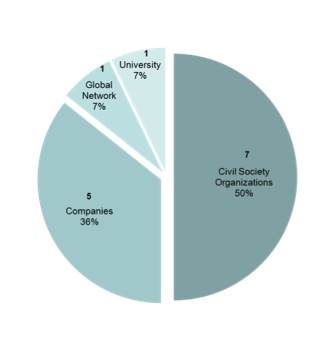 I was most thrilled by the different “natural abilities to perform” that I observed. Listening to these groups, they described their community as vibrant, creative, and “just great.” They talked about how their agreements were based in collaboration, possibility, creativity, social cohesion and innovation. For example, the members of a global network re-defining the management and leadership standards in their industry always spoke about … “our magic enables us to be high performers.” Since I do not believe in magic (except when I am with my kids), I dug deeper. When I mirrored back to them what I observed about the magic in their agreements, using my words from the Ecosynomics, they told me, “For the first time we have a framework that explains why we are so successful… and it all makes sense.”

Just a few days ago I met a 65 year-old German IT engineer, an entrepreneur who just sold the shares of his successful company in order to build up a new Internet-security company. He asked me what I am working on and I shared my passion for the Ecosynomic research. He got very excited and shared the following story: “I once worked in a company producing engines. Besides other things I was responsible for the performance of the different teams working in shifts. Here comes the connection to what you shared with me. There was this one team, which despite having the same pre-conditions, resources and possibilities at hand always… literally always was half an hour faster. Since I am an industrial engineer, I tried to understand why. How is it possible that they are always faster? Even working with them, we could not figure it out. Finally we mixed the high performing team with the low performing teams. It was a disaster. Every single team now was worse off. Listening to what you just shared, I think I start to understand the why. It had to do with the kind of agreements they came up with for themselves, the other, the team, their creativity to modify given processes and the firm believe that their way of doing will shift the performance of the whole. Hmmm… it is really interesting that it was the principles of collaboration that drove their performance.”

From this abundance-based framing, it is very interesting to observe reactions from organizations and groups that describe their reality as very competitive, scarce in potential and possibilities, etc. To these groups, the insights from Ecosynomics seem to be very unreal. After mirroring the results back, I often hear expressions like, “Yes, but…” “It is not possible to be better…” “Let’s be realistic, this is not logical. Let’s focus on the real stuff.” “Our employees are not ready yet.” “The older generation will not use it.” “It might work in other places, but not here.” “Something like this only works in volunteer contexts, but not in the real world.”

Have you heard expressions like these? Do you think you are a dreamer?

Christoph Hinske is an ISC Fellow, leading ISC’s work in Europe. He is the author of “Core Resources of Paradigm-Change Facilitation,” published recently in The Systems Thinker.  He is also a consultant at IFOK. He lives with his extraordinary wife and daughter in the beauty of a forest outside a small village in Germany.

This site uses Akismet to reduce spam. Learn how your comment data is processed.

Google Translate to Your Language